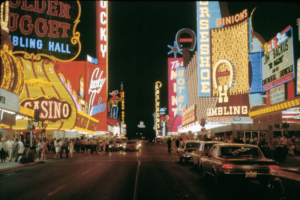 Las Vegas, NV to many Sports people such as Tennis greats Andre Agassi and Steffi Graf. As well as NFL quarterback Randall Cunningham its home to many actors including Nicholas Cage and Jerry Lewis

Former Motley Crue front man Vince Neil has had a successful run in Las Vegas. He has started the Off the Strip poker tournament, launched his own liquor company Tatuado, which means tattooed in Spanish. He has also been in the Las Vegas club business for a number of years.

How could you talk about Las Vegas and not mention Wayne Newton. The entertainer known as Mr. Las Vegas made his home in the city and has been performing in Vegas since 1958. A veteran when it comes to performing in Las Vegas, with an array of hits. A little piece of trivia is that Wayne Newton breeds Arabian horses.

Although born in Canada, Celine has made Vegas her home and currently performs at Caesar’s Palace. The 48 year old singer / songwriter has had an exceptional career atributed to her success performing in Las Vegas.

A popular comedy-magic duo that both have homes and perform in Las Vegas that reflects their quirky personalities with hidden doors, screaming skeletons and magic mirrors. After the success of their show on Broadway, the two have settled in Las Vegas and continue to perform their shows for captive audiences. A success they have enjoyed for the last 22 years, and still going strong.

Criss Angel or Christopher Nicholas Sarantakos is a well-known magician and illusionist who started performing in New York City before changing locations to Las Vegas. Named magician of the decade in 2009, he has a large repertoire of illusions and shows. One of these is the well known ‘Mindfreak’ TV series, with 2 seasons being filmed at the Aladdin and the third and final season being filmed at the Luxor Hotel and Casino.

So in conclusion, Travelling to Las Vegas doesn’t have to be about gambling and drinking. There’s something for everyone with fun for the whole family.