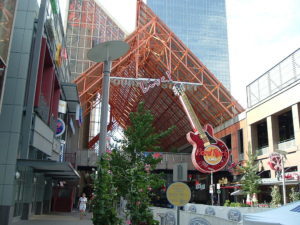 Most of the mainstream blockbuster hits that are presented they are filmed and exotic locations, or at least familiar ones. Cities like Hollywood, New York, Miami, Houston and even Las Vegas have become well known to as the centers for film and entertainment. But contrary to popular belief, many of small hometown cities like Louisville, Kentucky have not only been the shooting location for many of the movies, but influential in the stories behind the films. While there are many more movies that could be added to this list, below you will find a few of the most popular films that were actually shot in Louisville Kentucky, whether in whole or in part.

This summer comedy starring Susan Sarandon, Allison Janney, Melissa McCarthy, Ben Falcone and Kathy Bates was filmed in Louisville Kentucky, and the downtown Louisville skyline, as well as the Gene Snyder Freeway, are clearly visible in the film.

This drama suspensefully depicts the Ohio presidential primary, influenced by the 2004 campaign for Nick Clooney’s run for office in the Fourth District Congressional position. Actors and actresses Marisa Tomei, Philip Seymour Hoffman, Ryan Gosling, and Louisville native George Clooney played Award-nominated roles in this inspirational film where both the Riverside Drive River and the John A. Roebling Suspension Bridge are visible city representations in the film.

This good-for-the-soul movie features landmarks such as Marshall’s Backstretch Diner and the Keeneland Racetrack. This film, based on the rehabilitation of the Thoroughbred racehorse, Mariah’s Storm, stars Kurt Russell and Dakota Fanning.

This movie became popular during the Great Depression, as America watched in awe as the beloved equestrian Thoroughbred Seabiscuit triumphs in the end. Starring William H. Macy, Chris Cooper, Tobey Maguire, Jeff Bridges and Elizabeth Banks and was filmed not only in Louisville but on other pats of Kentucky.

Not only is this thriller film recorded in Louisville, the film itself is set in the city a well. Starring Al Pachino and Russell Crowe, this film travels a little bit, as the Colgate cock in Clarksville, Indiana can be seen in the movie.

Baseball lovers know this movie very well, starring Geena Davis, Tom Hanks, Rosie O’Donnell, and Madonna. The historic Soaper-Esser House was the filming location in the film for the scenes that were situated in the Rockford Peaches ladies.

This emotionally moving drama was filmed in various places throughout Kentucky, with scenes in Newport, Kentucky; Silver Grove Kentucky; Melbourne, Kentucky; and Covington Kentucky. Tom Cruise and Dustin Hoffman both star in the film and perform excellent depictions of their characters.